ABOUT VALENCIA
Located on the eastern coast of the Mediterranean Sea, Valencia is the third largest city in Spain. With a multicultural past, the Iberian, Roman, Visigoth and Moorish influence can be seen in many of the city’s most representative monuments and buildings. Tradition sits alongside cutting-edge architecture, natural parks like The Albufera, and the white sand beaches on the coast, offering visitors multiple possibilities in a twenty-first century modern city.
PLACES TO VISIT
• Valencia’s Silk Exchange – UNESCO’s World Heritage Site:

Valencia boasts thriving cultural, gastronomic and nightlife possibilities. At the heart of Valencia Old Town is the must-see Barrio del Carmen, an ancient district with cobbled streets, lined with medieval buildings and full of life. The old Turia riverbed now hosts a large green area where you can go for a walk or a bike ride, past the futuristic buildings of the City of Arts and Science. The University of Valencia, founded in 1499, is one of the oldest universities in Spain.
• In Valencia you can go sightseeing, relax on the beach, enjoy the fantastic cuisine or simply go shopping in modern malls or shops and boutiques in town.

City of Arts and Sciences alongside the former riverbed: 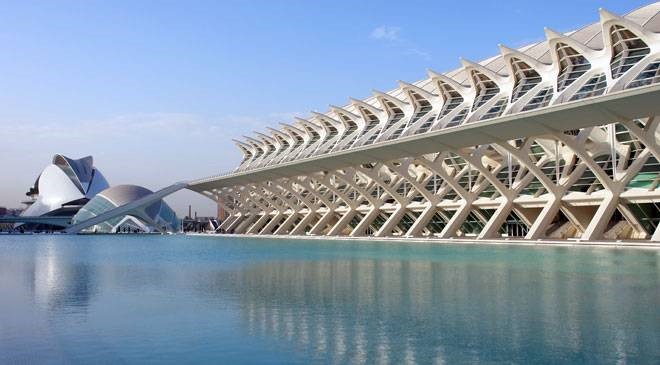 Find out more:
City of Valencia
Region of Valencia
What to visit and map
PRACTICAL INFORMATION
Electricity supply: Electricity is supplied at 220V - 50 Hz AC with European norm plugs.
Climate: Valencia is characterized by its blue skies, with July temperatures averaging highs of well over 30º by day and nights that usually remain above 22º.
Check the weather forecast
Credit Cards: Most hotels, restaurants and shops in Valencia accept the main credit cards such as American Express, VISA, Mastercard, 4B, Access y Diners Club.

Language: There are two official languages in Valencia: Valencian and Spanish. You will find that most people are not fluent in English, except hotel staff, but they will do their best to communicate with you.

Shopping: There is a good range of shops in the city centre and also big suburban shopping centres. Shops are generally open from 10:00 to 14:00 and from 17:00 to 20:30, Mondays to Saturdays. Department stores and shopping centres stay open during lunch time and close around 21:00 to 22:00.
Eating: Spanish eating habits are characterised by late hours. We normally have lunch around 14:00 and dinner around 22:00. Most restaurants open from 14:00 to 16:00 for lunch and from 21:00 to 23:00 for dinner. However, some tourist and informal places have longer opening hours.
How to reach the city
• By plane: The Valencia airport is about 12 km from the conference venue. It has direct flights with many European countries. Although some of them are non-daily, connections flights through Madrid, Barcelona or Mallorca airports are just less than one hour flight.

You can reach the city centre from the airport by taxi, by bus or by metro.

A bus service called Valencia-Airport line 150 departs every 26 minutes from 5:25 to 22:00 from Monday to Friday. Saturdays, from 5:25 to 22:05, every 35 minutes. The fare is 1.45€.
Further information: http://www.aena.es/en/valencia-airport/city-buses.html
Valencia-Airport line 150 timetable: http://www.fernanbus.es/Fernanbus-Linea-150-horarios.pdf
Metro. Underground service line 3 (red) and line 5 (green) from the airport to city centre stations (Xativa and Colón) depart every 10 minutes. Single fare to/from city centre: 4,50€. Approximate journey time: 30 minutes. For further information on getting around with Metrovalencia: http://www.metrovalencia.es

• By train: There are comfortable trains from Madrid and Barcelona. Speed train AVE connects Madrid-Valencia in a trip time of 1 hour and 35 minutes. The train station is located in the city centre. For information on timetable and fares visit www.renfe.es

• By car: There are two major roads leading to Valencia, one from Madrid (A-3) and another from Barcelona and France (AP-7).
Transport in the city:
There is an extensive, low cost public transport network covering the city including bus, underground, tram and taxi. There are different tickets and fares available:

Bus: single ticket (on the bus) for 1,50€. Also available “bonobus” (10 trips, bought at kiosks for 8,50€). Further information
Metro: single ticket fare from 1,50€ to 3,90€ depending on the route. Also available at metro stations the “bonometro” of 10 trips (ranging from 7,20€ to 20€). Combined bus-underground 1-3 day tickets are also available at kiosks. Further information
Taxis: are not expensive (but there is a minimum fare of 4,90€ at daytime and 6€ after 22:00. Prices may vary for the summer period), and you can pick them up at taxi ranks or stop them in the street, or ask the reception desk to call one for you.
Bike: Valencia is a bike-friendly city with over 120 kilometres of cycle paths. There are many stores where you can rent a bike. Further information
You can also use the public bicycle system (Valenbisi). Further information